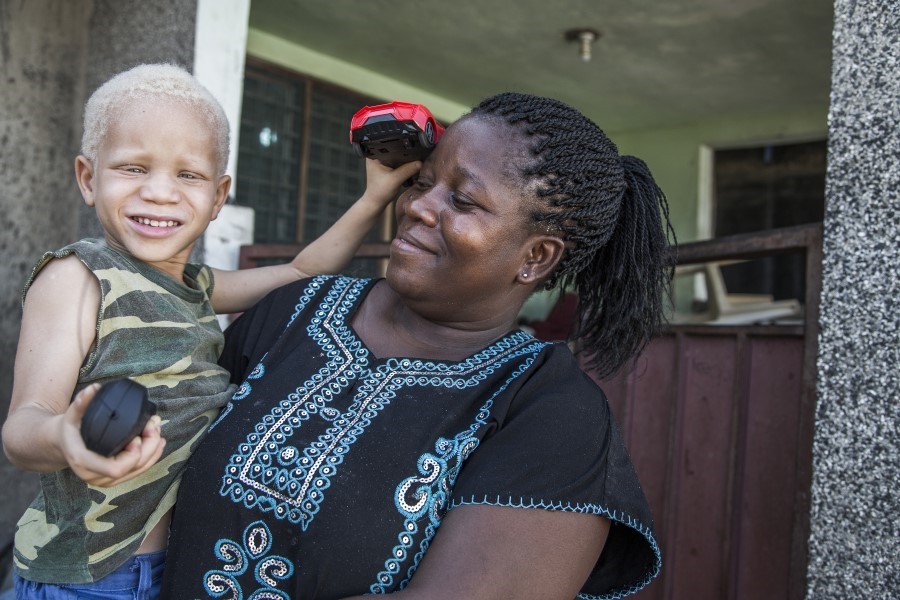 Mavis lovingly holds her 5 year-old son Nathaniel who was born with albinism. While she loves and cares for her son, she has struggled getting to where she is today. Mavis bravely shares that the birth of her son was “terribly traumatic.” She was reluctant to breastfeed and even care for him. But, she learned by watching family members love him that there was nothing wrong with him. If they could do it, then she could too. She has been able to create a deep and loving bond with her son and recalling the feelings she feels for him brings tears to her eyes.

Both mother and son live with her sister because Nathaniel’s father refuses to accept and support him. ENA met Mavis and Nathaniel through our Albinism Sensitization Program where she learned more about her son’s condition and how she can properly protect and care for his needs. ENA also provides for Nathaniel’s schooling costs which lifts a financial burden off of Mavis’ single income.

Mavis is now an advocate for her son and spends time educating community members, teachers, and classmates about his rare condition. She hopes ENA’s Albinism Sensitization Program continues to thrive so more community members can learn about this stigmatizing genetic disorder. She still faces harsh discrimination from the public, and works tirelessly to make changes through education. She wants her son, and all persons with Albinism to be treated as humans and with the dignity and respect everyone deserves. She claims, “We are all humans and should be treated [the] same regardless of our color.” Mavis. we cannot agree more!