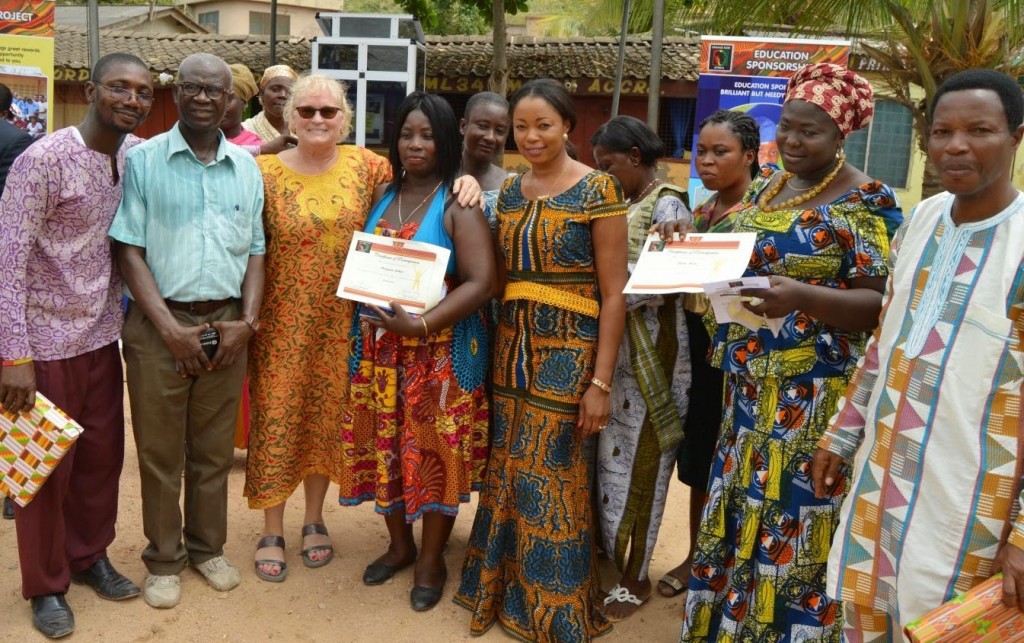 
The Oxford Adult Literacy Group is located in Mallam, a suburb of Accra. Mallam is a densely populated vibrant community with its occupants engaging in petty trading. 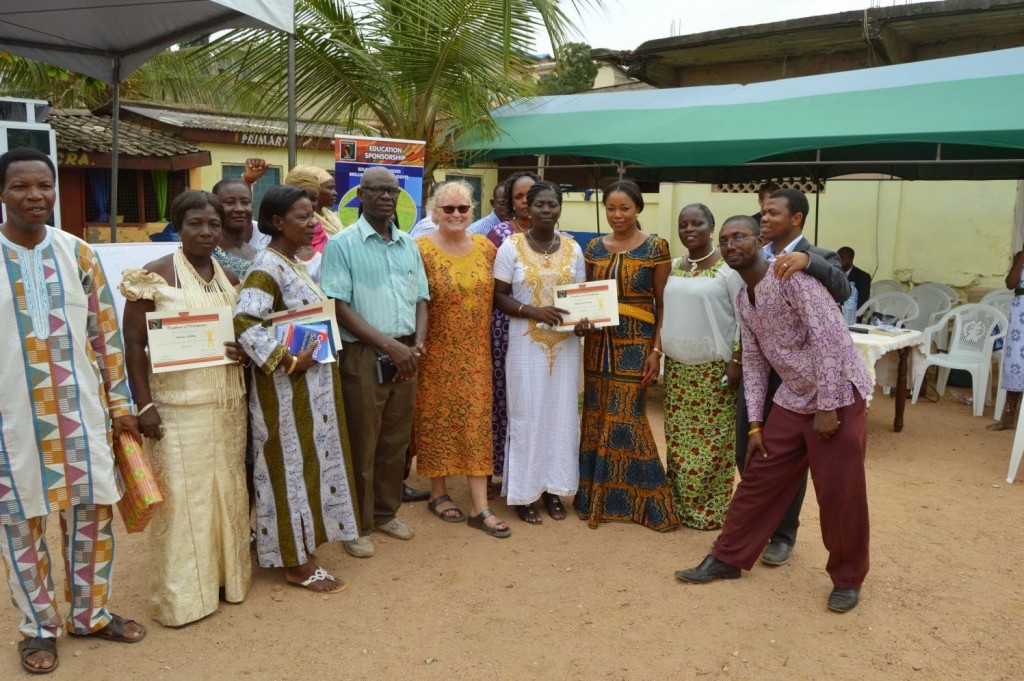 (Pictured above is ENA’s Lynette Gay and Cecilia Amankwah posing with participants.)
As part of ENA’s initiatives to make education available to everyone who is willing to learn, we collaborated with community leaders within the Mallam vicinity to introduce our literacy program a few months back. ENA proceeded to train facilitators and instructors to set the ball rolling for the literacy program, not only did the proprietor of the Oxford School Academy (Mr. Alexander Senyo) who also doubles as ENA facilitator welcome us, he willingly offered his premises to be used as a venue for the ENA literacy program. In a nutshell, the inception of the ENA program gave birth to the Oxford Literacy Group. The group which consisted of only seven (7) members at the commencement of the program could hardly read, write or identify letters of the English alphabet let alone practice skills of numeracy. With much effort and dedication, we inculcated in the participants an attitude of inquiry thereby creating a superb learning atmosphere to produce remarkable results. In about six weeks from the onset of the program, the number had soared to 25 consisting primarily of 23 women and 2 men. 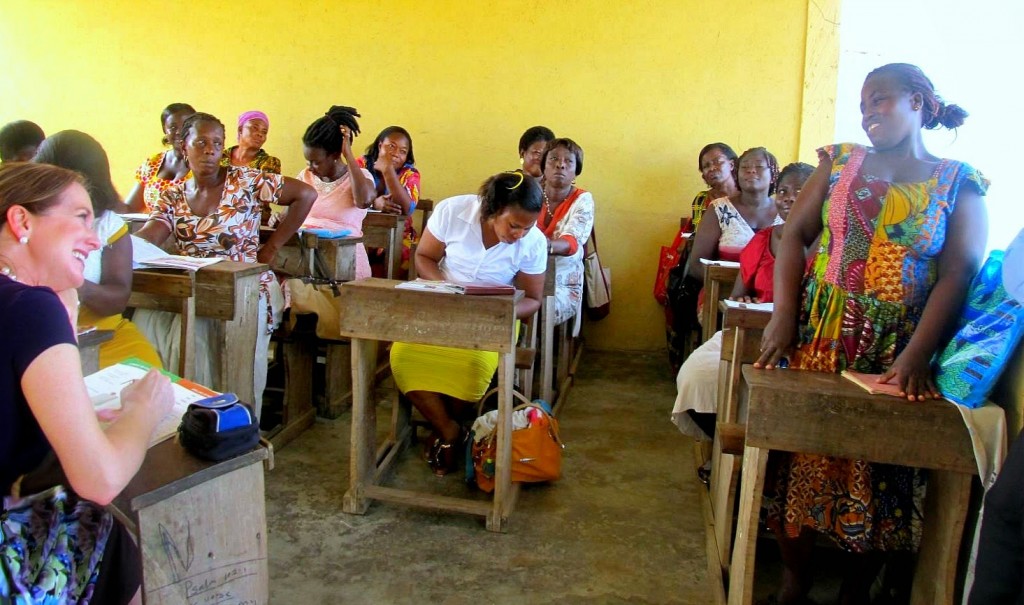 (Pictured above is ENA’s Jennifer Hogge interacting with participants)
ENA mode of implementation and delivery were recorded as follows: Classes were held every Tuesday and Wednesday from 4pm to 6pm each day. They were enrolled in the beginner’s class.
Firstly, they were taken through English alphabet, practiced writing them, phonetics, identifying vowels and consonants and joining the letters to form words. They were taught how to construct meaningful sentences with the words they formed. Strategic measures including visual aids were adopted to encourage students’ participation to bridge the learning curve.
What is remarkable in my opinion is the duration of time these activities took place. In the course of six months several participants had improved dramatically and could comfortably interact/communicate in English. The ENA manuals and module used played crucial and vital roles in expediting the learning process of the literacy participants. We encouraged class participation and group work. These were done to improve teamwork, build friendship and boost confidence in the participants. Classes were a delight to attend and the attendance was recorded as satisfactory. After six months of intensive teaching and learning, twenty out of the twenty five participants became eligible for advancement to the intermediate class to receive further knowledge in managing their resources effectively. They qualified because they had met the 80% attendance rate and exhibited signs of great improvements in reading, writing and speaking of the English language. 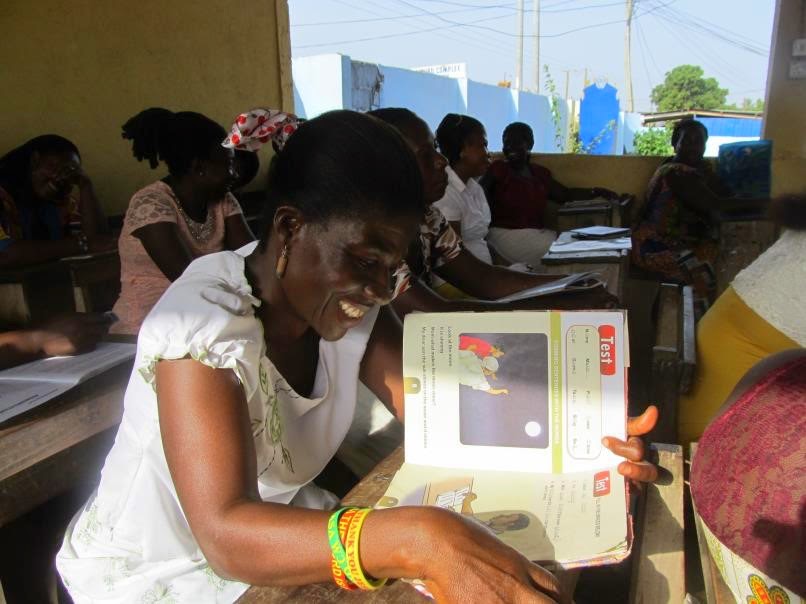 (A literacy participant reviewing literacy workbook.)
The efficacy of the ENA program coupled with a successful student commitment and participation warranted a befitting graduation ceremony which was graced by the presence of Sister Lynette Gay (Engage Now Africa Co-founder) who is pictured below handing out a graduation certificate to one of our graduates! 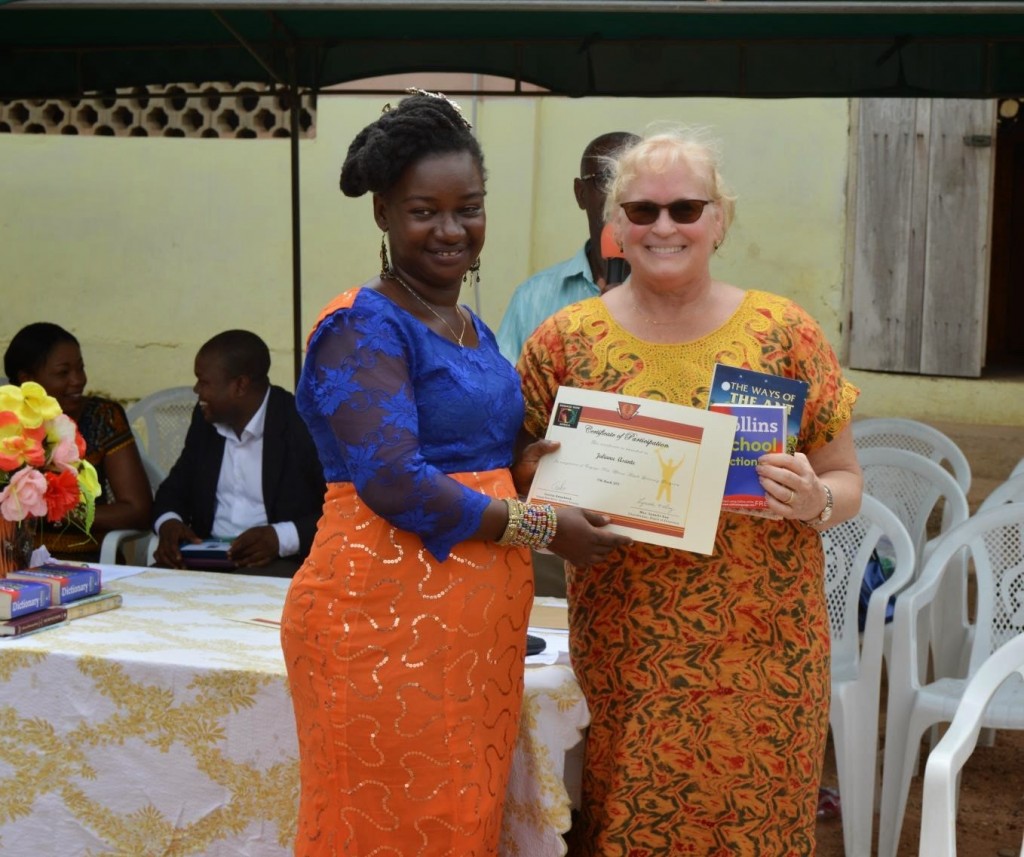 Tuesday 17th March 2015 (ENA Graduation Day) marked a significant chapter in the history of the Mallam community. The weather was sunny and humid but nevertheless, preparations began very early. All the necessary steps had been put in place and by 10:30am, the Oxford school grounds which was the venue for the occasion had been covered with rectangular canopies and plastic chairs with a mini stage.  I Cecilia Amankwah (ENA Ghana Country Director), arrived in the company of the Board Chairwoman and Co-founder of Engage Now Africa in the person of Sister Lynette Gay. Komla Afasi the Project Director of ENA, Paul Smith the ENA Internal Auditor, Francis Ansah the Education Director also joined some few minutes later accompanied by Mr. Derry an invited guest and a director at the Ghana Investment Promotion Council. 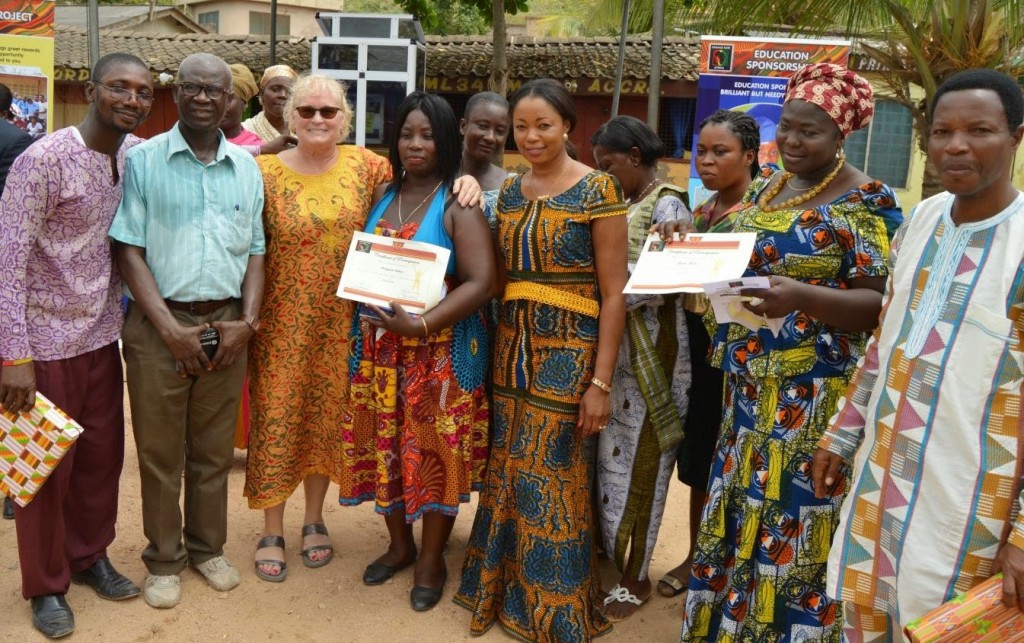 After exchanging pleasantries with some of the people in attendance and the graduating participants the program started at about 11:30pm. Mr. Azumah was recorded as the MC for the day. After welcoming the guests and participants, sister Juliet Asante one of the participants opened the program with a prayer which was well said in English. She was given a loud round of applause by the cheering family members and friends who were in attendance (guests both young and old, and from all walks of life were present to witness and also offer their support). Sister Lynette Gay was called upon to chair the occasion. She was introduced to the audience and she responded gladly to the call. She commended them on their achievements and also encouraged the graduates and everybody present. She urged them not to stop what they have started but keep on reading to improve their families and lifestyles. After Sister Gay’s remarks, I Cecilia Amankwah gave a short speech and also voiced out the ENA slogan “Never too late to learn”. We also emphasized on the mode of operations of the literacy department and challenged others who qualified to come aboard and be enrolled. The participants then took turns in demonstrating their ability to read passages from the ENA student manuals. Some also shared success stories on the benefits of the program in their lives. 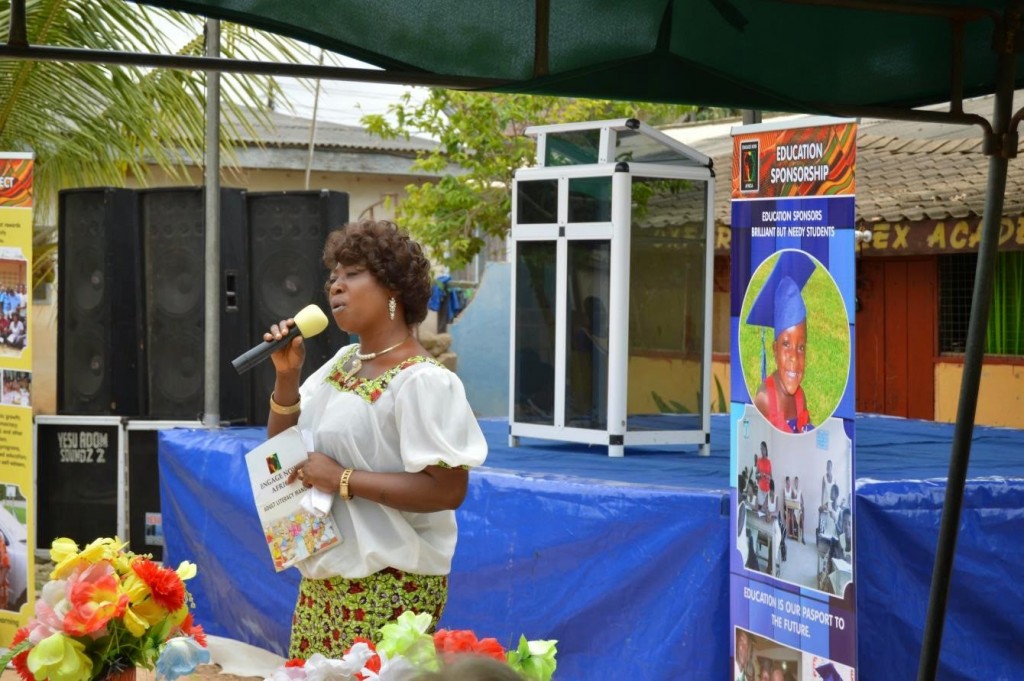 A 44year old participant, Grace Boateng (pictured above), who is married to a pastor and never stepped a foot in the classroom because she never had that privilege, always felt sorry for herself because she could not read nor write in English. She said this to Sister Gay, “I can’t thank you enough for such a remarkable program. I could neither read nor write, I have never been to school before.  I could not even identify my own name when written. I felt shy that as a pastor’s wife I could not read the Bible. ENA Adult Literacy Program is a miracle to me. Joining this program has helped me to be able to read the Bible at home and also in front of the church congregation. I even go to other branches to read and preach the gospel to them. Thank you ENA.  I am forever grateful to you. God will bless you for what you have done for me.”   After 20 minutes of entertainment and jubilation, we proceeded with the program as others witnessed in awe at the level of fluency of the participants recitations. Their drill on the formation of words stole the show as one could hear the crowd still miming the words even after they were done.
The first batch of certificates was presented to the graduates. Komla Afasi and Francis Ansah did the honors and gave out the certificates amidst cheers and beaming smiles on the faces of the recipients and the whole audience. Their presentation was followed by some well-orchestrated cultural and choreographed dances from the students of the Oxford School Academy who were also present. The atmosphere was quite festive and the audience couldn’t help but join the in the dancing. The final set of certificates was presented by Sister Lynette Gay and myself Cecilia Amankwah. Following the presentation, the graduates reciprocated the kind gesture by presenting gifts to their instructors and facilitators as a token of appreciation for their efforts.
Sister Gay gave her concluding remarks and entreated the graduates to encourage their husbands, friends and other relatives to enroll in the ENA literacy program to educate themselves and help improve their lives and that of the people around them. She also encouraged them to keep studying to improve on what they have achieved so far. The class representative Sister Anna Boateng said the benediction in English. 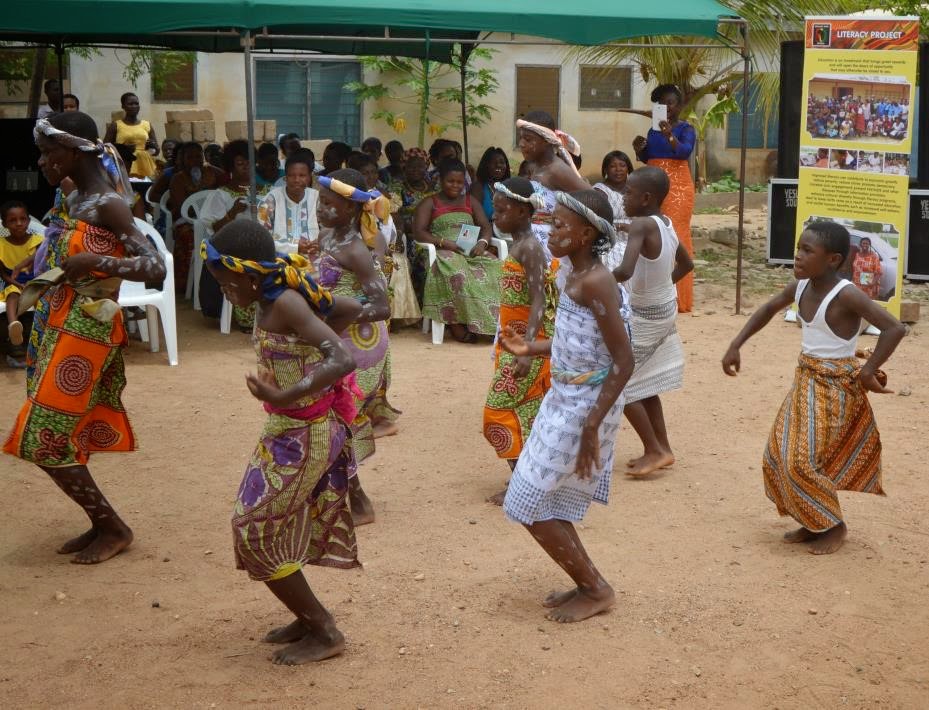 (The audience and ENA staff were delighted and entertained by the Oxford students amazing cultural display. Thank you!)
The program came to a successful end at 12:50pm. Refreshments were served to everyone and one could still hear the audience mimicking the formation of words performed by the participants. It was indeed a befitting graduation ceremony for deserving participants. Their joy tells each of us present that day that, indeed, it’s never too late to learn!
Engage Now Africa’s Literacy Program blessed and enriched the lives of several graduates on March 17, 2015. We thank the founding members of ENA for their continued support in offering education to the people of Africa. Special thanks to my colleagues Francis and Afasi and also to   Paul and Seth Smith for their support.
Written by Cecilia AmankwahTo make a donation to help us keep our literacy program running or to learn more about ENA’s literacy initiatives and program, visit us here!
]]>